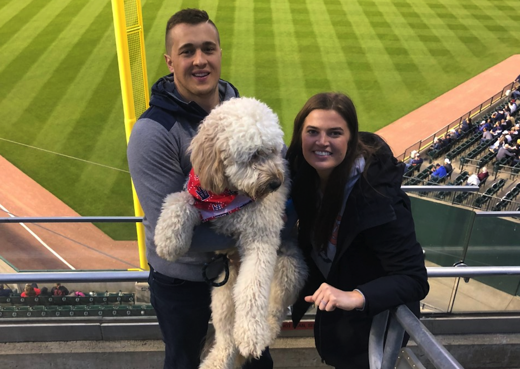 They say the couple that CrossFits together stays together.

Okay, maybe nobody says that. But it doesn’t mean it’s not true.

For Grand Trunk CrossFit members Alex and Ally Faust, they’ve been doing CrossFit workouts together for a few years, resorting to cherry picking WODs they found online before they officially joined a gym.

But it wasn’t a smooth transition from their backgrounds in football and volleyball to fitness with an approach grounded in weightlifting and mobility.

In fact, it was a rough journey from where they started to where they are now.

“I was one hundred percent against CrossFit,” said Ally Faust. “Alex begged me to come with him to Grand Trunk, to the point where we would get in fights. But the focus on mobility helped him get back on his feet after injuries he suffered during his football playing career, so he thought it could help me with my injuries.”

In August of 2016, Ally was involved in a car accident that totaled her vehicle, thanks to a distracted driver. She thought the extent of her injury was some nagging hip pain. But when the pain didn’t subside, she sought out a second opinion and found out she was suffering from a broken back that went undiagnosed for months.

After the new diagnosis, the doctor suggested physical therapy, but Ally didn’t want to travel down that path.

Then pain shots were suggested. She turned those down, too.

This injury had derailed her fitness journey, which led to her not putting a lot of stock in staying fit.

“I went for long walks and that was it,” she says. “I basically shut down, fitness-wise.”

It wasn’t until two years later when she came out of her fitness funk, thanks to some – ahem — gentle prodding by her husband.

“I learned better mobility through CrossFit, so I had an inkling it would help Ally,” said Alex. “I had torn quads and my hips were terrible because of my football playing days, but the focus on mobility helped me to overcome those injuries while I was playing, so it seemed like it was worth a shot for Ally.”

Alex came across a book during his undergrad days called Becoming A Supple Leopard, written by Dr. Kelly Starrett. The book focused on how to resolve pain and prevent injury, and it opened up in Alex’s mind a new way of thinking when it came to staying fit. Up until that point, Alex was used to the football player’s mindset that you weren’t making gains unless you out-benched and out-lifted your teammates.

But that didn’t bode well for his body when he was on the field. By being more mindful of his approach to staying fit – and trying to become a supple leopard – he was able to avoid more serious injuries that he saw befall his teammates.

“Becoming more mobile definitely helped in the sense that my body could handle the rigors of playing a sport like football,” said Alex. “But I was able to bounce back quicker because I learned how to move properly.”

CrossFit has also filled the competitive void that was lost when college ended and Alex and Ally were left without the athletic outlet they enjoyed during their undergrad days. Even though they don’t get to the top of the Wodify leaderboard every day, there are times when they push themselves to the fullest because they know of no other way.

“I get pissed off when I can’t Rx a workout,” said Ally. “I come from a pretty competitive background, so trying to win at all things is sort of in my blood.”

After finding WODs online, and convincing Ally to commit to CrossFit during a Buddy Week, the couple officially signed up in 2018, and they haven’t looked back since. In fact, it’s the rare day when you don’t see at least one of them show up to get in a good sweat.

“I don’t want to be too dramatic, but Grand Trunk has helped our relationship,” said Alex. “Regular fitness has helped Ally get back into shape and has put her in a better place mentally, which is obviously a huge boost. I think we’re both in the best shape of our lives.”

“After my back injury, I was in a bad place,” adds Ally. “But now I have something to look forward to that makes me feel good, both physically and mentally. Thanks to Brooklyn and Diana, it feels like our lives are a bit more normal.”

Of course, that’s not to say Alex and Ally have run out of things to argue about. Like any couple, they still have the occasional tiff.

“I like to remind Ally that I knew this was going to be good for her, she just needed to commit,” said Alex. “I’m very happy to report that I was right, although she might disagree with me.”

This site uses Akismet to reduce spam. Learn how your comment data is processed.

« 5 Tips to Help You Change with the Season

Eat to Thrive, Not Survive »